The Department of Defense released its findings from a survey intended to identify the needs of military spouses.

Information from the 2019 National Guard and Reserve Component Spouse survey revealed more than half of spouses are satisfied with the National Guard/ Reserve way of life. However, responses were captured prior to the global pandemic that set off an increased op tempo along with a number of activations for domestic issues, such as missions for civil unrest, vaccination distribution, election security, and natural disaster response. Still, Patty Barron, Deputy Assistant Secretary of Defense for Military Community and Family Policy, says surveying families is important because it “allows us to do a better job in supporting them.”

“There’s a misconception sometimes that we’ve forgotten completely about this reserve component, but we really truly haven’t. But sometimes as they [families] find it harder to access information, we find it hard to connect with them,” Barron said.

What does the 2019 Survey of Reserve Component Spouses say about military life pre-pandemic?

The DOD utilizes survey data to create and inform programmatic decisions. Key findings from the 2019 Survey of Reserve Component Spouses include:

But it is unclear whether these findings still align with what families are currently experiencing.

“So that whole concept of the old-fashioned traditional reserves, really has gone away,” said Air Force Reserve Command spouse Paloma Greenwald. “The service member is very clearly working two jobs, and a 40-hour work week doesn’t exist. That has an enormous impact on families. So, the commitment to serve is a big sacrifice, not only to the service member but especially to their spouses and kids.”

COVID-19’s impact on the Guard and reserves

Greenwald’s story is not unfamiliar to leadership. Barron admitted that COVID-19 has amplified an already activated force, placing more strain on families.

“Did that spouse who had worked a job lose that job or choose not to work during COVID because they were trying to take care of kids at home and all that went along with it?”

Leadership is keenly aware the data doesn’t paint a complete picture and urges families to continue to share their stories through surveys. In addition to surveying families, Barron says the DOD is proactively monitoring reserve component family issues, like the stress levels and feelings of isolation felt by 2019 survey takers. In addition, they are also keeping an eye on newly-emerging issues like food insecurity.

In fact, Sens. Elizabeth Warren and Tammy Duckworth sent a letter to Secretary of Defense Lloyd J. Austin III after a report from the U.S. Census Bureau emerged detailing “extreme food insecurity” among members of the National Guard and reserves. The senators are “requesting information regarding the scope of hunger among these service members, the extent to which widespread hunger among troops and their families presents national security concerns, and the Department of Defense’s plans to fix this indefensible situation,” according to the letter.

For some reserve component spouses, it seems irrelevant whether their spouses are activated under Title 10 or Title 32 orders, they just know they need help during sustained deployments. So, when Air National Guard spouse Carolyn Chase’s husband finally became entitled to receive Exceptional Family Member Program (EFMP) services, she was looking forward to utilizing respite care to lighten the load.

But simply being eligible meant she could apply for, but not immediately receive these services for her children. She was told that due to their remote location “no one else in your area has EFMP, there’s no provider for you,” Chase says. “We need you to go find a provider that is willing to do the Air Force background check.”

But the frustration is not limited to EFMP or remote locations.

“You have a timeline before you have to disenroll again,” said Brandie Berish, whose husband has previously served in the reserve components of the Air Force. “Right when you gain those programs and the ability to get your child or your spouse help that they need, whether it’s medical, or a therapist, you lose it.”

Barron urges spouses to continue to share their experiences, stating “we definitely use the information that we get from the surveys and adjust or create programs based on the findings.”

If you are a military spouse looking to utilize current programming for careers, education, and more, visit Military OneSource. 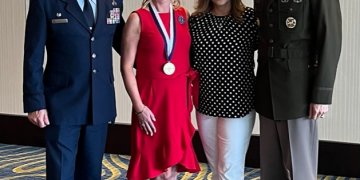