Montoya Baylis, a member of the Mississippi National Guard, poses with a poster of "Behind the Rank," the series in which she shares her story of surviving domestic violence. Photo by Rahshaad Baylis

“My mom had to sign my enlistment paperwork,” she said, due to her age at the time, and she served alongside several family members.

When her unit was called to serve in Iraq as part of Operation Iraqi Freedom and Operation Enduring Freedom, she spent her 21st birthday in the sands of Mosul alongside her father, two uncles, multiple cousins, and even friends from high school in her unit.

Baylis bonded quickly with the other guardsmen, though serving alongside her family members brought unique hardships.

“My constant reality was watching family being placed in harm’s way almost every day,” she recalled, and two unit members were killed toward the end of the deployment.

After her deployments, Baylis fell in love with and married another member of her unit. But in 2013, after their marriage ended and talks of possible reconciliation broke down, her ex-husband attacked her and held her at gunpoint.

The experience and betrayal of trust changed Baylis’ life forever.

“I never in a million years would have thought that I would survive Iraq, just to have my life be placed in danger by a fellow soldier-in-arms,” she said. “The fact that we wore the same uniform and for him to disregard all the training that we had with harassment and assault baffles me to this day.”

For a long time afterward, Baylis had difficulty coping.

“Sometimes we as survivors prefer to just forget about what happened, but the fact remains that we can’t,” she said of the horrific experience. “Even the smallest things can trigger a memory. I can see that night unfold inside my head as if I’m watching a television screen whenever that memory is triggered.”

As she continued to struggle with the after effects of surviving domestic violence, she was connected through the entrepreneurial Facebook group Combat Boots 2 Red Bottoms with best-selling author Lila Holley, the founder of Camouflaged Sisters, an organization devoted to connecting female veterans and sharing their stories.

Holley invited Baylis to share her story in her successful series “Behind The Rank,” which brings together a new group of co-authors in each volume to share their stories of service and military life through the perspectives of the women who live it.

For Baylis, who had loved reading and writing since she was a child and always knew she would someday write a book, the project had the unexpected benefit of proving to be great therapy.

“I never really talked about what happened that night in such detail before, except to the police,” Baylis said.

And she hopes that sharing her story helps other domestic violence survivors to know they are not alone. Her story is featured in Behind The Rank: Volume 5, out now.

“I want survivors to be proud of their scars because they show growth and just how far they’ve come,” Baylis said.

For creator Holley, this is exactly what she hoped to accomplish with the “Behind The Rank” series.

“My main hope is that women read our books and know that they are not alone in their struggles,” she said. “Through our stories we want them to see what the process of healing looks like and to know that healing is available to them as well. We do not want any woman to suffer in silence or feel alone in her struggles.”

Through Camouflaged Sisters, Holley feels called to build a sisterhood connected through storytelling.

“It’s our service that connects us, but it’s our stories that make us a sisterhood,” she said. “Our members and co-authors include women currently serving, women veterans, military spouses, military caregivers and supportive military family members – all branches, all ranks and all eras welcomed.” 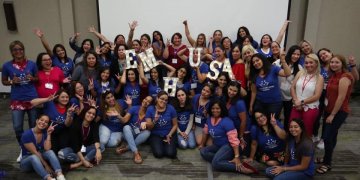