Military consumers have reported monetary harm, including those related to deceptive investment schemes, totaling more than $267 million, according to the Federal Trade Commission.

“I started working at the Securities and Exchange Commission in 2013 and I have seen financial fraud … affinity fraud (investment fraud that targets members of a specific group based on race, age, religion, affiliation, etc.) really with military as an issue the whole time I’ve been here,” said SEC commissioner Caroline Crenshaw.

The FTC’s prepared statement from July 2022, delivered to the U.S. House of Representatives’ Committee on Oversight and Reform and Subcommittee on National Security, reported the highest complaints in the following categories:

But the emergence of digital assets or cryptocurrency scams has taken center stage.

“We’ve seen a rising popularity of digital asset scams … people really are intrigued by crypto … I think there is a concern that investors may be less skeptical of investment opportunities that involve something that’s new or cutting edge,” Crenshaw said.

She said the SEC recently brought civil charges in a $2 billion bitcoin-related investment scam that was a Ponzi scheme.

And one of the ways investors are lured is through romantic deceit.

“You might meet somebody who you think is a love interest on an online site or social media or wherever people are gathering to try to pair up,” said Carol Kando-Pineda, of the Federal Trade Commission’s Bureau of Consumer Protection. “You think that you have a friendship or a relationship going for several weeks, maybe longer, and they may test you to see if you’re willing to send them small amounts of money or send them small amounts to invest.”

Kando-Pineda said the FTC issued a crypto-fraud report this year, concluding that since the beginning of 2021, 46,000 people reported losing more than $1 billion in crypto scams. The median individual loss was about $2,600.

The losses, according to Kando-Pineda, were 60 times the amount reported in 2018.

“So clearly, scammers have caught on. And it’s working for them,” she said.

And deceived investors have no recourse with cryptocurrency. Banks and lenders cannot provide help.

“It’s like cash, where the money can’t be reversed,” Kando-Pineda said. “Once the money is gone, it’s gone.”

Behind the investment schemes

Who is behind these scams? According to both Crenshaw — an Army Reserve captain — and Kando-Pineda, military personnel or people pretending to be military-affiliated are significant players in these cons.

Recent charges against former U.S. Navy chief petty officer Robert L. Murray for his involvement in an investment scheme that used Facebook to defraud Navy veterans, reservists and active-duty seamen illustrate how military members are targeting their own.

Murray was an unregistered investment adviser who raised about $355,000 from approximately 44 investors in 14 states, according to the SEC. He told investors the fund would be invested in publicly traded securities, but misappropriated nearly $150,000 of the fund for personal gain.

“This is anecdotal, but if you come off active duty and you’re working with some sort of financial firm … [and] might not necessarily know all the rules … they’re trying to get business and often that unfortunately just leads to missteps,” Crenshaw said. “Sometimes intentional, sometimes not.”

She said the military connection is the hook and a way in for the bad actor.

“But you get your military buddies because that’s all your connection,” Crensahw said. “They trust you because you’ve been in the military with them.”

Despite the military commonality, veterans and service members need to be cautious.

“There are going to be scammers, regular retailers, dishonest businesses, whoever … that are going to try and gain your trust by claiming a military affiliation,” Kando-Pineda said. “And certainly, people want to support businesses that support the military, and that’s terrific. But you just want to know who you’re dealing with.”

She also said to be wary of the “can’t miss, buy now” investment opportunity or an offer with a deadline. Additionally, investments promising guaranteed returns with minimal or no risk should raise an eyebrow.

“That doesn’t exist in the securities market,” Crenshaw said. “There is always some.”

If it sounds too good?

“Only scammers are going to guarantee you huge profits, huge returns … It just doesn’t work that way,” Kando-Pineda said.

The payment method requested to deliver money to the fund investor can indicate a scam, too.

“If a love interest is going to show you how to invest in crypto, that’s kind of a warning sign,” she said. “You’d probably want to stand down a little bit.”

The SEC doesn’t have criminal jurisdiction but does have civil authority. Crenshaw is working on changes.

“We can get people out of the industry,” she said. “It’s one of the things I’ve been thinking of, are ways we can work with Congress to have higher penalties for folks that commit specific affinity frauds including military … because it’s just awful. I’ve seen it as long as I’ve been here.” 6 finance podcasts for the military 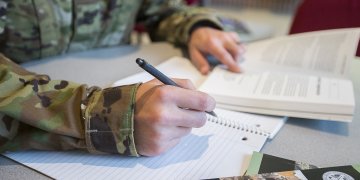